I Went To Agra To See Elephants And Bears. Here’s Why… 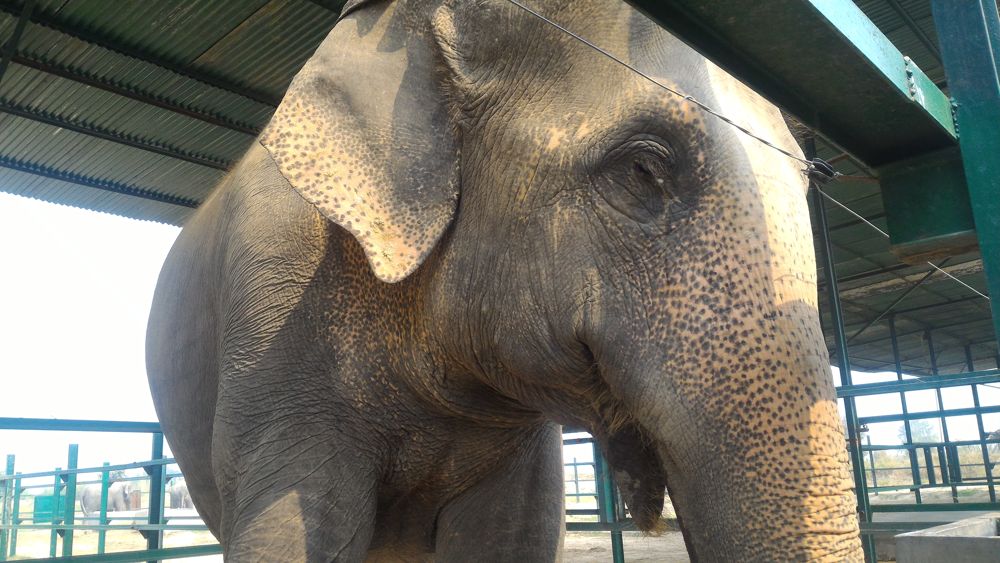 In November 2016, we went to Agra. Yes, we went to see the Taj Mahal and it was a marvel of architecture.

But this is not about my visit to the Taj Mahal, about which much has been said and written by people more knowledgeable about the splendours of  Mughal architecture than me.

No, my heart was set on a different kind of experience, one that I had been envisioning ever since I read about an organisation called Wildlife SOS and the remarkable work they were doing for wildlife conservation in India.

I first heard about it when I watched its co-founder, Kartick Satyanaran’s TED Talk on how Wildlife SOS launched and successfully implemented a campaign to rescue every “dancing” bear in India.

I grew up in India at a time when we would, quite often, see dancing bears on the roads and never think twice about how much torture and suffering they must have endured to become a source of entertainment for us ignorant humans.

So, I was touched at the efforts that Wildlife SOS had made to put an end to this cruel, centuries-old practice. Even better, they achieved this without punishing the practitioners – the Kalandar community – and instead, helped them find alternative sources of livelihood.

I followed Wildlife SOS on social media and read about their efforts to rescue every circus elephant in India. I learned about their Elephant Conservation and Care Centre (ECCC) in Mathura, 57 kilometers from Agra. 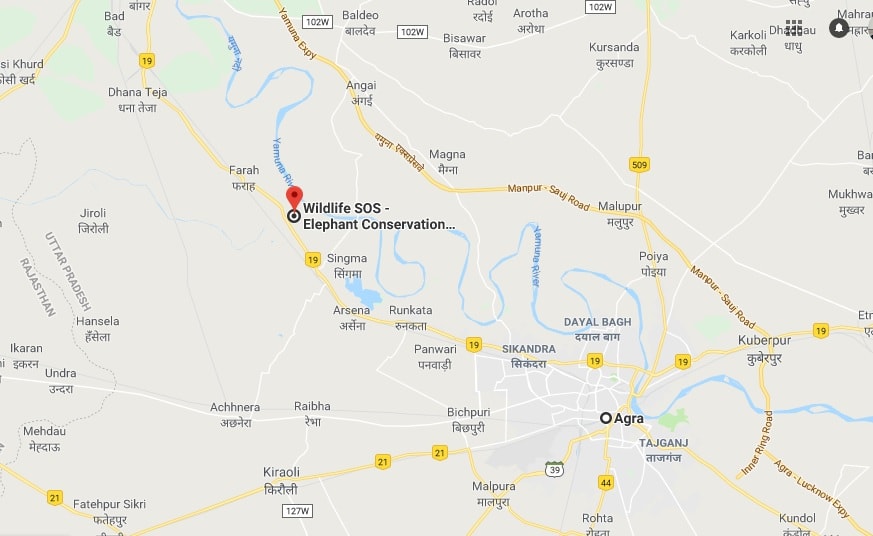 I started donating a small amount to them every month – my way of assuaging the guilt I felt about the cruelty with which my species had treated these blameless creatures for centuries.

I remember visiting circuses that exhibited wild animals as a child and felt ashamed for it, even though I was a child and knew no better at the time.

According to The Dodo, there are some 3,500 captive elephants in India and the majority of them are used for elephant rides by Western tourists.

They are kept in deplorable conditions: Walking on hot, tar roads. Trained with spiked chains and “ankush” (bullhooks). No veterinary care. Dehydration, cracked feet and abscesses. Being shackled for long periods in the heat.

But when you know better, you do better.

In the internet era, there’s no excuse for ignorance. The evidence of the impact we’re having on other species and on the planet is there for all to see.

Animal cruelty is a complete no-no today. We’re part of a more aware and enlightened society than that of our grandparents, and it’s up to us to undo some of the damage and the cruel practices that continue till today in some parts of the world.

If you love elephants, you shouldn’t ride them or watch them perform. For people like me, that applies to all other animals too. But let’s get back to my story.

Inspired by the work that Wildlife SOS was doing with rescued elephants and bears, I wanted to visit the ECCC in Mathura and see it for myself. So I planned a trip to Agra, which of course, included the Taj Mahal. Growing up Indian and never having seen the Taj kind of makes me the ignorant tourist in my own land.

So I went to Agra to see elephants and bears, but made that touristy trip to the Taj, too. I won’t go into our long and boring journey, except to note that Wildlife SOS will send a cab to pick you up from your hotel in Agra, if you email in advance and tell them you need one.

Of course, you must pay for it. As a charitable organisation they cannot offer freebies. They also provide accommodation in Agra, but I learned of that only after I’d booked my trip or I would have asked about that too.

Our journey from Agra to Mathura was a non-event, but reaching the ECCC filled me with joy. My dream was coming true and I would be able to visit an organisation whose work I admired and supported with all my heart. 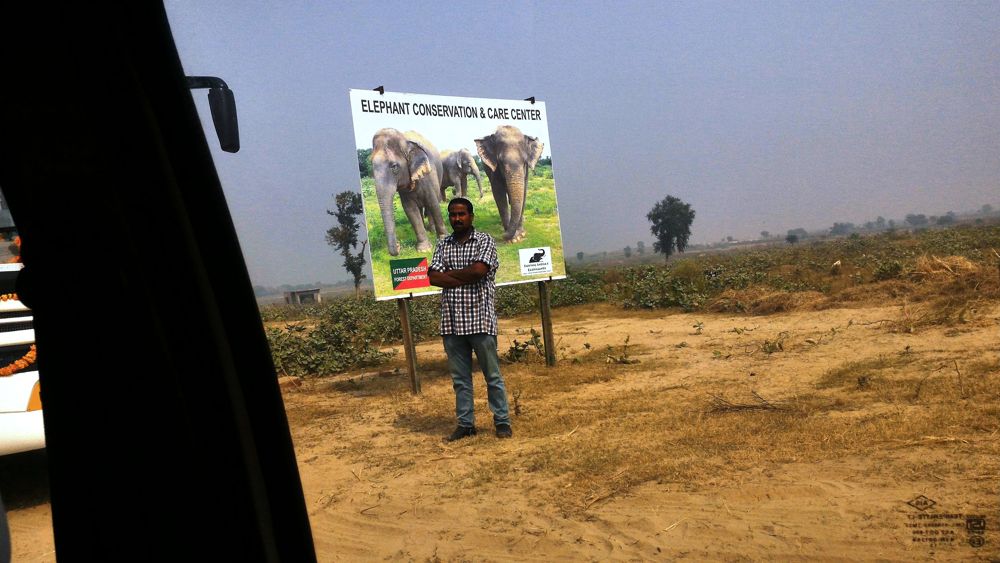 As we entered and signed in, we could see the elephants in their enclosures. I had knew the names they were given – Suzy, Sita, Rhea, Peanut, Coconut, Lakhi, Asha, Raju – from the posts on the Wildlife SOS Facebook page. They already felt like familiar friends, but I was going to get to know them better. 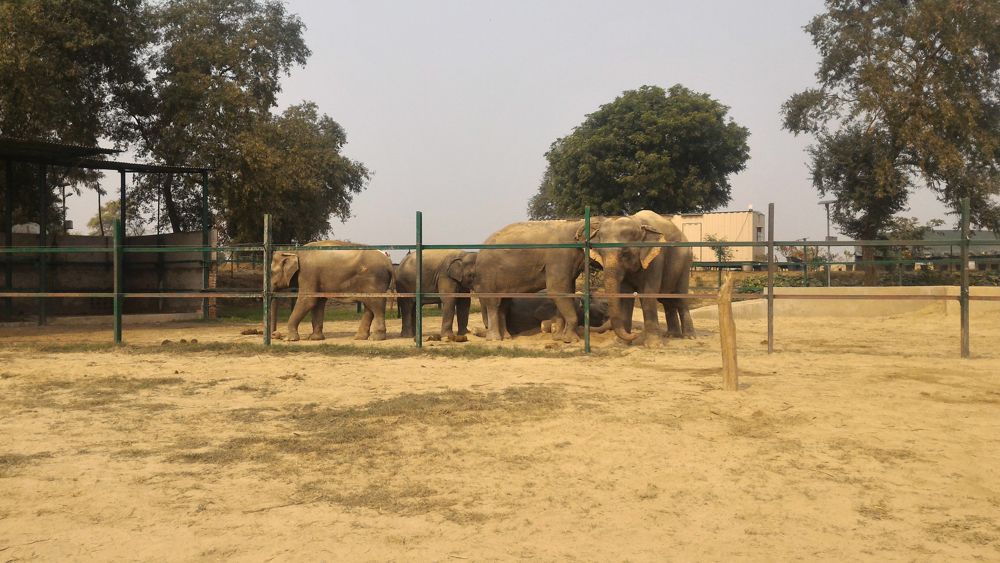 We met Chanchal, who was rescued in June 2012, after she got into a terrible road accident in Noida.  She was severely injured with bruises on her body and a cut on her right knee.  She was unable to bend one knee possibly due to a ligament tear. 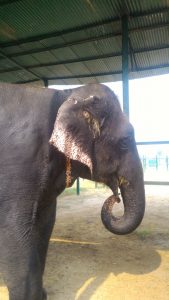 Initially, she would keep to herself and wouldn’t even interact with the other elephants. It took her approximately a year to get over her traumatic experience as a begging elephant and get comfortable with her new found freedom.

Chanchal means “mischievous” and she certainly lives up to her name with her daily antics, winning hearts every day.  Around 21 years old, she loves playing in the water and spends a lot of time throwing mud on herself.

Over the years, she has formed a close bond with another ellie called Bijli and together they enjoy munching on fruits and treats and going on long walks around the centre.

While we were watching the mahouts lovingly bathe and scrub down Chanchal, a beautiful and statuesque elephant called Maya came up to inspect me with her trunk. She was rescued in November 2010, from a circus where she was forced to work for entertainment and then chained at the end of the day.

When she first arrived at ECCC, Maya was really underfed and withdrawn. Possibly the most heart-warming part of Maya’s recovery was her socialization with Phoolkali.

Today, 42-year old Maya is a happy and healthy elephant, enjoying her new life of freedom. She has a peaceful demeanour that can put anyone near her at ease and is best friends with the equally regal Phoolkali. Later that evening, we accompanied Maya and Phoolkali on their evening walk. Check out the video here for that footage.

We also met Sita, who was rescued in November 2015 after nearly five decades in captivity. She was riddled with severe and chronic ailments, such as painfully damaged footpads and cuticles with severe abscesses, and to make it worse, had severe psychological trauma.

Sita was nearly 60 years old and her pitiable condition was a testament to her years of mishandling and improper care. Her preliminary veterinary assessment on arrival at ECCC showed that she was suffering from a condition known as ankylosis in the joints of both her forelimbs, one of which had incurred a fracture during her time in captivity, and that had never been allowed to heal. 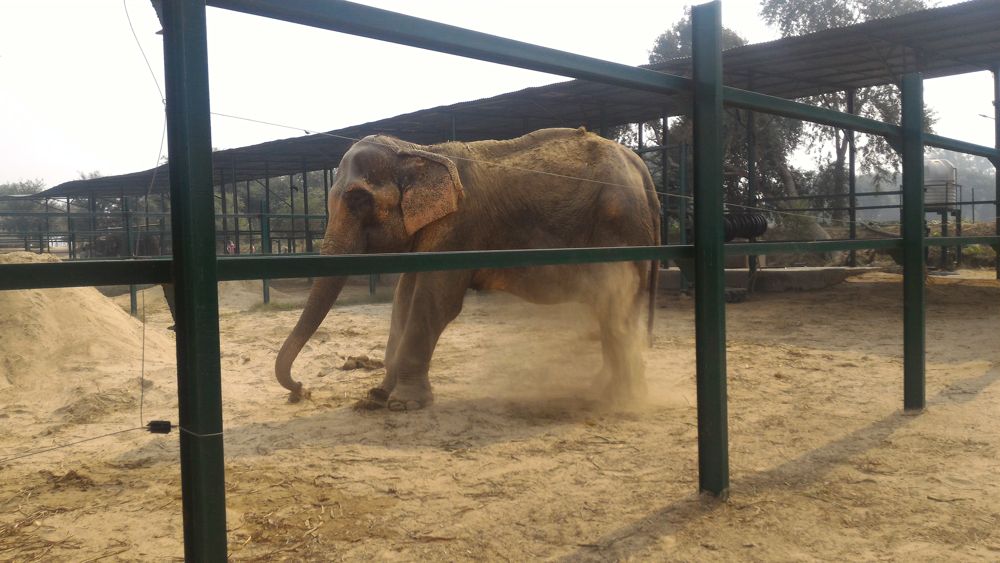 Because of these problems, she was not able to lie down and rest properly in more than a year. At the ECCC, Sita had a chance to ease the stress on her legs by lounging in the pool and getting regular pedicures and foot care.

When we met her, she was enjoying a foot bath with Epsom salts and intensive treatment for her feet. In April 2017, Sita passed away. I was glad to have met her and known that she received the love and care she so deserved in her senior years.

Most of the elephants we saw, in fact, had severe injuries when they came to the ECCC, and were still being treated for all sorts of problems, the most common being abscesses in their feet after being forced to stand on hard ground without any rest for long periods, or from walking on hot, tar roads.

We also met Rhea, a former circus elephant who was trapped along with Sita and another elephant called Mia, under miserable conditions – a sisterhood strengthened only further by their shared experiences of pain. They were reunited at the ECCC in April 2016, and Rhea began her journey to recovery.

54-year old Rhea was riddled with ailments. Her feet were in atrocious conditions, with deep painful cracks running through her swollen soles. Her nails were cracked and her cuticles overgrown, a testament to the neglect she had been subjected to all those years. 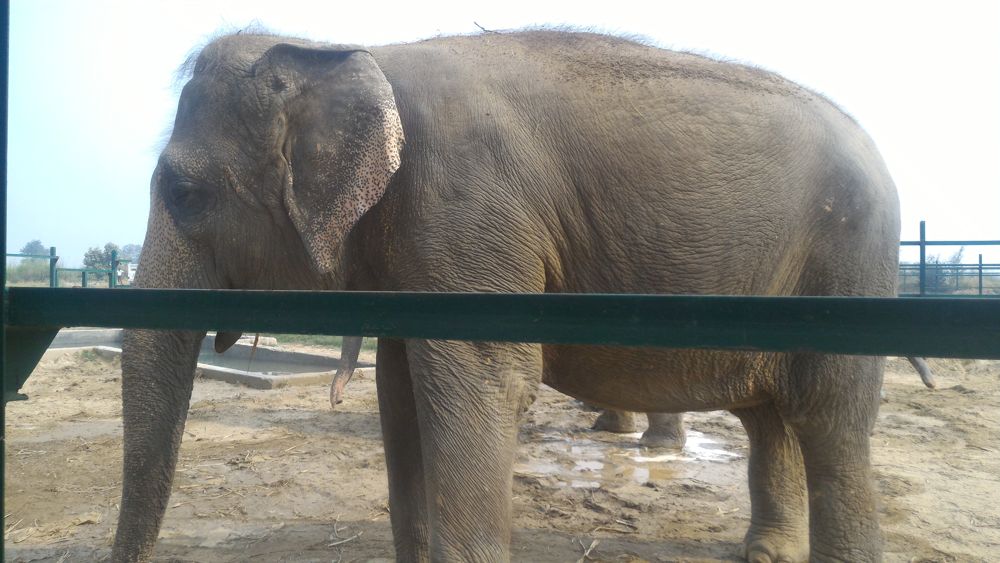 In the days since her rescue, Rhea’s spirit won the hearts of everyone at ECCC, and she slowly began making friends with her keepers and the other elephants. She is especially fond of her neighbours, Maya and Phoolkali, and often stands squeaking at them while eating her meal of green fodder.

But the ellies that stole my heart were Peanut and Coconut, the babies of the “nut herd”, who we caught munching on their sugarcane. 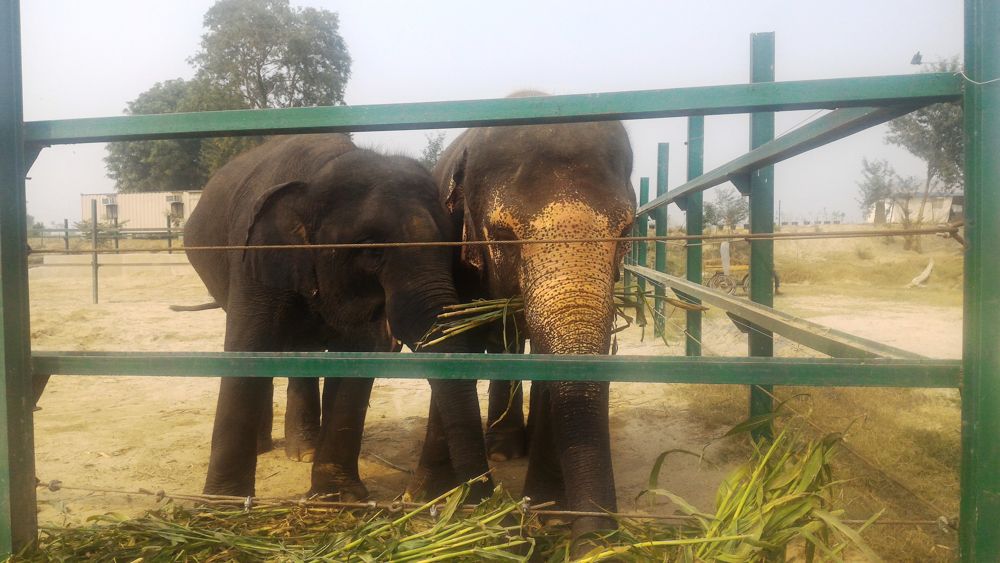 In April 2015, Wildlife SOS rescued four elephants from a circus in Maharashtra. Called Macadamia, Walnut, Coconut and Peanut, the “nut herd” had suffered for years as performing elephants.

When they were not being exploited for the amusement of the circus audience, they were made to spend long hours standing in filth and restrained painfully by tight ropes around their legs.

Today, 8-year old Peanut and 14-year old Coconut have made remarkable progress. Both of them are absolute delights to watch as they follow the other big elephants around the facility, occasionally poking at them playfully with their trunks.

They are part of Asha’s adoptive herd and, being the youngest, receive immense love and care from the older elephants. Peanut loves keeping everyone on their toes with her energy and excitement. She runs around, tosses about her tyre and spends hours playing in the pool.

Coconut spends her time gorging on delicious fruit treats, playing with hanging enrichments feeders, going on long walks and lounging in her pool with Peanut. 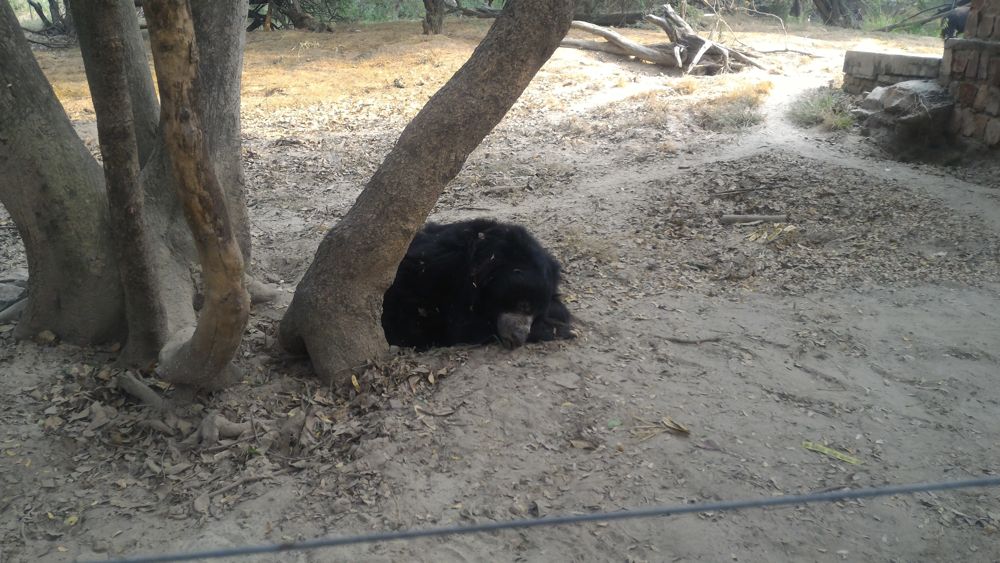 Established in 1999, it currently houses around 200 sloth bears, and other species of wildlife, in large forested enclosures with ponds and shady trees.

Right now Wildlife SOS has over 20 elephants, 300 bears, and 30 leopards that depend on them every day. Having donors gives them the confidence to know that they can feed them and meet their medical needs well into the future. You can donate to Wildlife SOS and support their work.

You can also visit their centre and volunteer to have the unique opportunity to work alongside these incredible animals and the people who care for them. Imagine the satisfaction of knowing that you’re helping to make a positive impact on their lives.

Click here to watch a longish video of our visit to Wildlife SOS’ Elephant Conservation and Care Centre (ECCC).

For more tips on animal-friendly travel, read the guidelines here to ensure that the choices you make end up benefiting the wildlife and people of the destinations you visit. 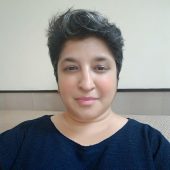 Priya Florence Shah blogs at AhoyMatey.blog, where she chronicles her quest for responsible, animal-friendly and family-friendly travel options. You can connect with her at @PriyaFlorence 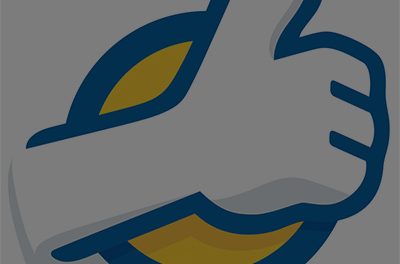 Official Supporters of the ChildSafe Movement 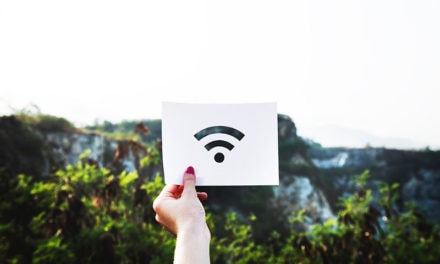 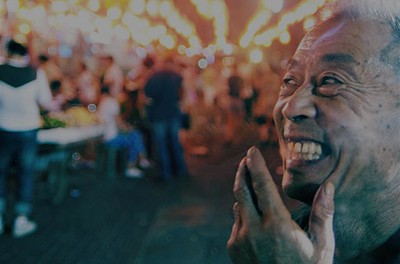 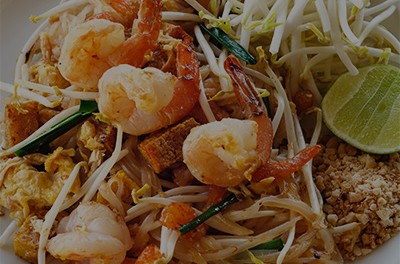